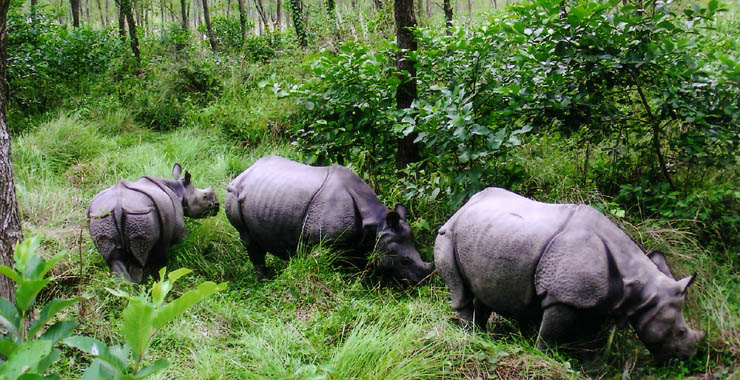 This is the best Package Deal with all Major Cities are included. In this ", you will visit the major part of the Kathmandu city with popular ancient temples and sightseeing of the city. We will visit Chitwan for exciting jungle safari. At Chitwan you will have a Jungle Safari at Chitwan National Park along with local cultural tours. If you love nature and adventurous, then you will love this Chitwan Jungle Safari Package. From Chitwan we will drive towards Nagarkot, You will love this the beautiful sunrise & sunset with beautiful view of the Mountain range at Nagarkot. "Jungle Safari Tour" makes it perfect Nepal Trip

Upon arrival at the Tribhuvan International Airport in Kathmandu, you will be greeted with welcome garland, sightseeing to

A. Hanumandhoka Durbar Square
Kathmandu Durbar Square or Hanumandhoka Durbar Square is the plaza in front of the old royal palace of the Kathmandu Kingdom. It is one of three Durbar (royal palace) Squares in the Kathmandu Valley in Nepal, all of which are UNESCO World Heritage Sites . Hanuman Dhoka (Hanuman Gate), with several complexes spread over an area of about five acres, is the social, religious and urban focal point of Kathmandu. The square is the complex of palaces, courtyards and temples that were built between the 12th and the 18th centuries by the ancient Malla Kings of Nepal. The Durbar is divided into two courtyards, the outer comprising Kasthamandap, Kumari Ghar, and Shiva-Parvati Temple, and the inner consisting of Hanuman Dhoka and the main palace. It also houses two museums. Important ceremonies, including the coronation of the Nepali monarch, are held in the Kathmandu Durbar Square.

A. Syambhunath Temple:/ Monkey Temple
Swayambhunath is an ancient religious complex atop a hill in the Kathmandu Valley, west of Kathmandu city. It is also known as the Monkey Temple as there are holy monkeys living in the north-west parts of the temple.Swayambhunath occupies a central position, it is probably the most sacred among Buddhist pilgrimage sites. The Swayambhunath complex consists of a stupa, a variety of shrines and temples, some dating back to the Licchavi period. Although the site is considered Buddhist, the place is revered by both Buddhists and Hindus. Numerous king Hindu followers are known to have paid their homage to the temple, including Pratap Malla, the powerful king of Kathmandu.

B. Boudhanath Stupa
Boudhanath Stupa (or Bodnath Stupa) is the largest stupa in Nepal and the holiest Tibetan Buddhist temple outside Tibet. It is the center of Tibetan culture in Kathmandu and rich in Buddhist symbolism. The stupa is located in the town of Boudha, on the eastern outskirts of Kathmandu. The stupa consists of a dome at the base, above which is a cubical structure painted with eyes of Buddha looking in all four directions with the word "unity" in the main Nepali dialect between them. There are pentagonal Toran present above each of the four sides with statues engraved in them. Behind and above the torana there are thirteen tiers. Above all the tiers there is a small space above which the Gajur is present. The stupa has many artifacts inside it.

C. Depart from Kathmandu to Chitwan.
Arrival in Chitwan
Chitwan is known as Chitwan National Park, mainly because the city's main attraction is the national park itself.If you wanted to see birds and animals in Nepal, this is where you would come. For animal lovers, Chitwan national park offers them an opportunity of a life time to see Royal Bengal tigers, one-horned rhinos, various species of birds and butterflies. Your choice of Resorts and lodges are located in the region. Most include elephant safaris, jungle walks, canoeing and cultural activities.

Lunch/Dinner and overnight at hotel in Chitwan.

Breakfast, drive to Nagarkot:
A. Nagarkot: Arrival in Nagarkot:
Nagarkot, located 32 kilometers east of Kathmandu, is one of the most scenic spots in Bhaktapur district and is renowned for its spectacular sunrise view of the Himalaya when the weather is clear. Visitors often travel to Nagarkot from Kathmandu to spend the night so that they can be there for the breathtaking sunrise. Nagarkot has become famous as one of the best spots to view Mount Everest as well as other snow-topped peaks of the Himalayan range of eastern Nepal.
Overnight at hotel in Nagarkot

A.Early morning sunrise view
B.Bhaktapur Durbar Square
Bhaktapur Durbar Square is the plaza in front of the royal palace of the old Bhaktapur Kingdom, 1400m above sea level. It is one of three Durbar Squares in the Kathmandu Valley in Nepal, all of which are UNESCO World Heritage Sites.The Bhaktapur Durbar Square is located in the current town of Bhaktapur,also known as Bhadgoan, which lies 13 km east of Kathmandu. While the complex consists of at least four distinct squares (Durbar Square, Taumadhi Square, Dattatreya Square and Pottery Square), the whole area is informally known as the Bhakapur Durbar Square and is a highly visited site in the Kathmandu Valley.
C.Patan Durbar Square/ Krishna Mandhir Temple
Patan Durbar Square is situated at the centre of Lalitpur city. It is one of the three Durbar Squares in the Kathmandu Valley, all of which are UNESCO World Heritage Sites. One of its attraction is The Ancient Royal Palace where Malla kings of Lalitpur resided.The Durbar Square is a marvel of Newa architecture.The Square floor is tiled with red bricks. There are many temples and idols in the area. The main temples are aligned opposite of the western face of the palace.The entrance of the temples faces east, towards the palace. There is also a bell situated in the alignment beside the main temples The Square also holds old Newari residential houses. There are various other temples and structures in and around Patan Durbar Square build by the Newa People.
D.Shopping Time:
You can indulge yourself with personal activities like shop for locally produced, unique, Nepali products.
E.Farewell Dinner
Overnight at hotel in Kathmandu.